Overview
The first half of 2017-18 has once again seen an increase in the number of people applying for Destitution Grants from the Refugee Survival Trust, in comparison to previous years.

Gender
Analysis of gender of applicants to the destitution grants programme shows that the increase in applications comes predominantly from men; whilst the number of women have stayed relatively constant, the number of male applicants have increased by more than a third when compared to the same time period last year:

48% of Destitution Grant applicants were homeless at the time of application, compared to 28% in the same period in 2016-17.

The number of children included in applications remains high, 192 in Q1 and Q2 of 2017-18, compared to 218 over the same time period the previous year. Our Destitution Grants are always given as a ‘last resort’  and it remains a significant concern to the Refugee Survival Trust that so many refugee and asylum seeker children are destitute and that their families are not receiving other forms of support.

There has been a significant increase in the number of people applying for support with essential living expenses. The fact that more than 300 individuals and families have been left in this situation in Scotland in just 6 months is again a cause for concern.

There has also been a steady increase in the past two years of the number of people applying for travel grants to go to Liverpool. Since January 2015 any asylum seeker wishing to submit a fresh claim has to travel to Liverpool to submit paperwork. This is an arduous and potentially dangerous journey that asylum seekers usually undertake in one day, travelling down on the overnight bus, waiting for an early morning connection, staying most of the day in Liverpool and returning late. At the stage of making a fresh claim, most applicants would have had other support removed and would not have the means to pay for their travel without the support of RST.

One positive development is that the number of people applying for short-term financial support because they are awaiting mainstream benefits has reduced. 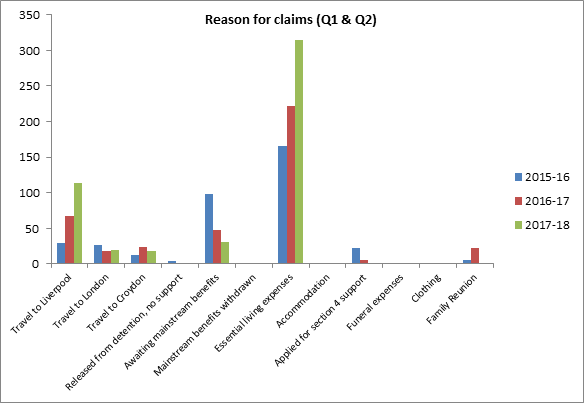