Asylum in UK Parliamentary Report on Immigration and Consensus

In January 2018, the UK Parliament published a report called Immigration policy: basis for building consensus. Written by a committee of MPs, the report is the outcome of an inquiry into “whether it might be possible to build greater consensus on immigration policy” in the UK (paragraph 1). In this post, we briefly consider what the report says about asylum. 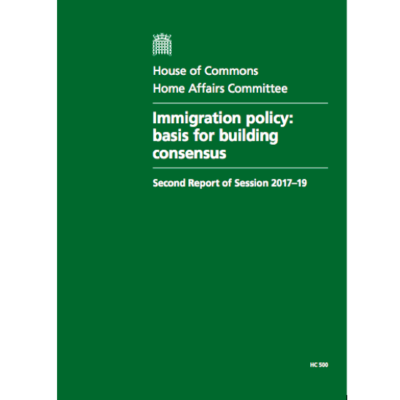 The report is structured around five recommendations, as follows:

Humanitarian protection is discussed under the third recommendation on taking different approaches to different migration types. Three main points about humanitarian protection are made in paragraphs 73-79. First, that asylum commitments must be sustained. Second, that the Government should increase efforts to confront misconceptions about asylum seekers among the public. Third, that the Syrian Vulnerable Persons Relocation Scheme has had successes that should be built upon in a widened resettlement scheme.

It is positive that the report emphases the need to continue supporting those in need of humanitarian protection. The Refugee Survival Trust gave 526 destitution grants in the first two quarters of 2017-18, totalling £44,595. This indicates that a number of asylum seekers in Scotland struggle to meet their essential needs. Ongoing, widened support which appreciates existing initiatives could do much to alleviate the destitution of asylum seekers.

However, the report’s discussion of asylum also requires careful consideration. The report says that “a much clearer differentiation must be made between asylum and migration for other reasons” (paragraph 79). While asylum seekers have specific protection needs, labels associated with ‘different types of migration’ can be problematic. Simplified divisions risk exacerbating negative attitudes to people who, for example, are not recognised as refugees. It is important to bear in mind that all migrants have human rights, irrespective of their migration status.