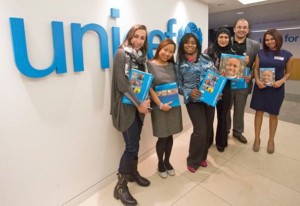 The aim is to lobby the government to allow unaccompanied children in Calais to rejoin relatives in the UK. There are currently about 600 juveniles in Calais, but to date only 20 have been allowed to enter the UK. Every night they try to smuggle themselves aboard trains and lorries, and risk harm in other ways.

Unicef is very concerned about this situation, which contravenes the EU regulation which states that children in Europe in this situation can have their asylum cases transferred to the UK.

A whole series of Climate Change summits is due, at which UNICEF will be present to promote its new Children’s Champions campaign. We are asked to urge the UK government to support UNICEF aims to help refugee children.

The UNGA High-Level Meeting on Refugees and Migrants is an opportunity for the U|K government to demonstrate its support for refugees.